Wyman Jones
When I reflect back on this week as a whole, I realize two very important lessons from this program. The first lesson is that there is a lot more to storytelling than just the who, what, when, where, and why of a story. There is much more behind the scenes work that goes into effectively telling a story to your audience. Some of these things include gathering information, transferring and saving files, logging and transcribing quotes from subjects, having back up story ideas in case one fails, and the list goes on. Organization plays an important part in the development of a story.

The second thing I learned is that I must be able to write if I want a job in my career field. This took me a while to understand. I was blind to the idea for years because I felt my focus is in production and I wouldn’t need to have an excellent or even a proficient skill set as a writer.

The reality of the situation is completely the opposite, I do need to be proficient. Any person can learn shortcuts in media editing software, have the best camera equipment for the job, and know the concept for the film you want to create. But to be able to take those concepts, ideas and thoughts and put them out on paper, for yourself and others to understand, that is what separates successful projects from those that fail.

While I may hate writing, the idea of knowing that every word I type takes me one step closer to a storytelling work of art, motivates me to want to take a writing class to understand the basics better. While I have learned many things that I will take with me, these were really the two that stuck out to me the most. 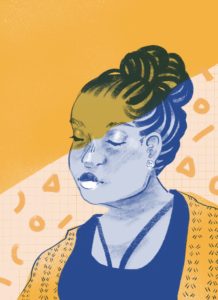 Simone Benson
This week has been a learning process for me. When I saw the workload, I was immediately worried about completing the process by the end of the week. I will admit, I was not confident I had skills to do this. It was a relief that I reached the goal of completing my project.

The Next Generation Radio program gave me the confidence that I can have a voice in this world of journalism. I was finally comfortable to use my voice as a writer and tell the stories I desire. All of the mentors were extremely helpful in every way possible. The environment was structured and it was a productive atmosphere.

I am forever grateful for this opportunity because the skills I learned through this program are going to advance me in my career. One of the many takeaways I have from this program is to always be kind and know that there is always someone there to help. Often times we compete as journalists to have the best story. But, if you work as a team and really have a heart for storytelling that’s how the best stories are told. I just want to be a great storyteller and after this week I am positive I can do so. 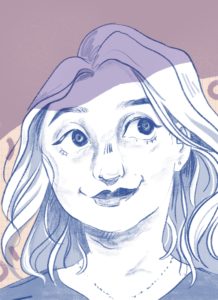 Shayla Klein
I wanted to be a part of Next Generation Radio since I took a trip to NPR Headquarters with my school’s RTDNA chapter. Doug Mitchell, the program’s director, gave us a tour and then sat us down to tell us about Next Generation Radio. After I went home, I looked up the previous projects, and I thought it looked super cool and fun, but I never would have imagined the tremendous value of the program until I started it this week.

My story was on JC Faulk, a black activist in Baltimore. Collecting the audio and taking the pictures all went very smoothly. The part that was the most difficult was sitting down to write the web story and the captions for social videos. Most of the stories I have written before were not as personal as this project was. I struggled a lot with trying to write his personal story as a white person. I would have these moments were I felt like I didn’t have the right to tell his personal story since I didn’t share the same experiences. In the end, though, I feel like I did a fairly good job of presenting my subject accurately.

Another big lesson that I learned this week is that it’s important to take breaks during work. Our editor, Traci Tong, would have us take breaks and play with silly putty or play a game. I remember one time I was so caught up in editing my story that when she told us it was time for a break, ten seconds in, I was thinking, “Can I go back to work now?”

It’s easy to get so caught up in your work that you forget to take some down time for yourself, but Next Generation Radio taught me that I am not my work, and there are so many experiences that I shouldn’t miss that are non-work related. In that same vein, through the workshops at the beginning, I learned that it’s OK to say no to jobs that you don’t want to take. You should interview a job just as much as they interview you, and know when you have enough on your plate.

While I’m sad that the week is over, I’m excited to take my lessons and experiences and put them into future work.

Robert Simmons
After a frantic 56 hours of interview cancellations, cold calls, Instagram DM’s, and fierce googling, I finally sat down with Jamar Jones, a local filmmaker, to capture his story.

I had a mentor by my side and we’d knocked out a dry run earlier in the day, but I still felt slightly nervous and unprepared. My mind has been wired from my background in video production to approach a story thinking visually, and, generally, to have more than an hour of preparation. But, through the chaos, I absorbed so much about radio.

To start, here are some words of radio wisdom I picked up from my mentor, Daisy Rosario, of WAMU, Washington, DC, (paraphrased by Rob) throughout the week:

I noticed a big distinction between film and radio in the intimacy of a story. There’s no camera between the journalist and subject so recording gradually transitions into a simple conversation between two people. And the visuals of the story are left to the listener to create, your only control as a journalist is to find sounds and shape the narrative to paint a picture.

It was also a great reminder of how amazing it feels to be surrounded by talented and encouraging people doing meaningful work.

Many thanks to Next-Gen Radio, Daisy, and everyone involved in the experience!

Emily Pelland
This project is especially meaningful to me. I went to Morgan State to complete my undergraduate degree in journalism, and I was a part of the first partnership between MSU and West Virginia University for the Bridging Selma project. (Next Gen mentor Mary Kay McFarland was also on that trip in Selma, Alabama).

The open office style allowed for us to collaborate with the other mentors and other students. My mentor, Elaine Heinzman, is a master in audio storytelling. I felt so fortunate to have her coach me along the way. I learned a great deal from her honed ear. Each breath, each transition, and each word were weaved together.

Before we went out to record, she said: “None of this ‘lav’ business.” I have been focusing on video recently and setting up my interviewees with lavalier, or “lav,” mics, and so capturing the story with mainly audio was a great exercise with a mentor. I used a shotgun mic and a portable mic. I recorded a video portrait to include a quote about my interviewee Erricka Bridgeford’s love of Baltimore.

While editing, one of Elaine’s catchphrases was to “trim the fat,” as we worked each sentence to be succinct, direct, and impactful.

Once we had a draft, editor-in-chief Traci Tong listened and provided her expertise in editing. The editor is invaluable, and the best to tell it to you straight.

“Don’t feel bad,” she said after her suggestions on my first draft.

The fatigue was the best kind – I was hunting for a great story through captivating quotes and eloquent supportive ambient sound.  The lessons are still solidifying in my mind. I set out that night to record again, and it greatly benefitted the story. In fact, it became the main focus.

My interview with Bridgeford went smoothly, and she was an excellent interviewee. It was a beautiful discussion about her perspective of Baltimore and what it means to be part of this city. She is incredibly active in the community, and “runs on adrenaline and crazy.”

Her laughter is boisterous and contagious; her passion for Baltimore is profound. Bridgeford visits each murder site in the city where she repeats positive affirmations to the deceased and to the murderer. During the ceremony, she cries, but afterwards, she laughs with friends.

This reporting week was already a great experience, and my experience with Bridgeford impacted me deeply. I feel closer to my hometown. Like Bridging Selma, this greatly impacted my career and will be with me the rest of my life.